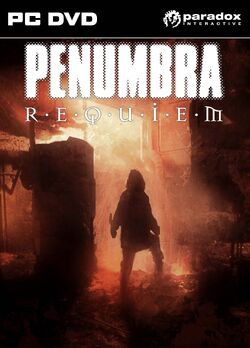 Penumbra: Requiem is an expansion pack to the game Penumbra: Black Plague by Frictional Games originally released on August 27, 2008. Unlike Black Plague and Penumbra: Overture, the focus is almost exclusively on puzzle solving.

The game starts as the last one ends, with Phillip sending the 'kill them all' message. As soon as he finishes one of the Infected ambushes Philip and hits him on the head with something unseen. The player then controls a character in some kind of tomb. Items need to be collected in each chamber in order to move on to the next. In the journey, the player starts to see familiar places from other parts of the facility and receive communication from a person who later identifies himself as Phillip's former adviser, Red, from the first Penumbra game. A communication is received from a member of The Shelter advising that while the Tuurngait does not know that Phillip has sent a message to the outside world, The Shelter staff are aware that it has happened. This is contradictory as the member of The Shelter who delivers the message is in fact part of the Tuurngait hive mind.

The game, and the entire series, has two possible endings. One concludes with Philip joining Red in the incinerator from Overture, deeming regular life not worth living. As the rest of Requiem seems to have been a figment of Philip's mind, this leaves him dead in the room where the game originally began and where Black Plague ended. Philip can also choose to leave Red to die on his own, and return to the fishing boat which was originally used to take him to the mine in the first place. This seems to be a fulfilling of Red's statement that it is «better to have a story and end it than never to realize it has begun.» However, it is the version of the boat which appeared in Philip's out-of-body experience rather than the version that appeared at the beginning of Overture, perhaps implying that he is still lying in the room where the game began, trapped inside his mind.