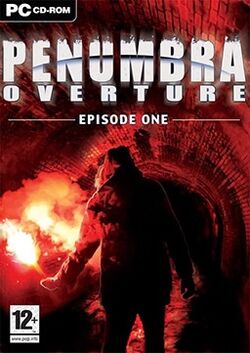 The game blends the genres of survival horror, first-person shooter, and adventure. The use of Newton Game Dynamics emphasizes physics-based puzzles as well as physics-based combat, without standard weapons such as shotgun, machinegun, grenade launcher and handgun. The game also takes advantage of advanced artificial intelligence to respond realistically to noises and light, creating stealth-based gameplay.

There are no firearms in the game, so during combat the player is limited to improvised melee fighting with a pickaxe, or throwing objects at attacking creatures. The game is designed to emphasize stealth and avoidance over direct conflict. For example, Philip can close doors behind him to temporarily hold off attacking enemies.

The game's main focus is on exploration and classic adventure game object interaction: examining and collecting objects and using them to solve puzzles.

Set in the year 2000, Penumbra: Overture follows the story of Philip Buchanon, a thirty-year-old physicist whose mother has recently died. After receiving a mysterious letter from his supposedly dead father, Philip follows a series of clues that lead to him to a mysterious location in uninhabited northern Greenland.

The harsh cold forces him to take shelter in an abandoned mine. Unfortunately, the mine's entrance collapses as he enters it, and he is forced to move deeper inside. Within the mine, Philip discovers diary extracts written by a scientist of some sort, who was alone and gradually resorted to eating cave-dwelling spiders as an alternative food source as his supplies diminished. The unknown person also describes discovering a psychoactive toxin in the spiders and deduced that, after eight months of consuming them in the mine, it was beginning to have an effect on him, physically. Philip also begins receiving radio messages from Tom "Red" Redwood, a man driven insane by cabin fever. Red promises that if he is found, he will give Philip answers. The game follows Philip as he descends deeper into the mines in search of Red while unraveling the secrets of the mine's previous and current inhabitants.

Philip quickly discovers that the mine is inhabited by an ecosystem of abnormally large and hostile animals: dogs, giant spiders, and gargantuan earthworms among others. Abandoned outposts and various scattered papers found throughout the mine indicate that a secret society is studying some unusual phenomena inside the mines.

Following clues and solving various puzzles, Philip eventually comes to an area deep within the mine where Red is waiting for him. Red waits inside an incinerator where he begs Philip to kill him. With no other option, Philip activates the incinerator and, amongst Red's remains, he finds items he needs to progress into a new area of the mine which is identified as "The Shelter". Once inside, Philip notices what appears to be a human watching him. Philip approaches the figure, but the lighting is suddenly extinguished and Philip is knocked out and dragged away.