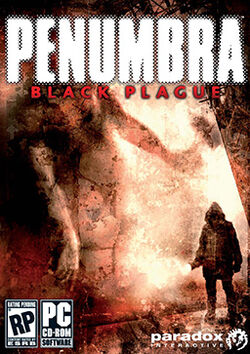 Penumbra: Black Plague is the second installment in the Penumbra series and originally released on February 12, 2008.

The story of Black Plague begins as an email sent by Philip Buchanon to a friend, explaining what has happened to him and begging him to finish the work he could not. The rest of the game then proceeds as a flashback narrated by Phillip to his friend in the email, beginning from where the previous game left off.

The game begins with Phillip waking up in a locked room, after being knocked out by an unseen being at the end of the first game. Phillip manages to escape via a nearby air-vent, and finds himself in the underground research facility of the Archaic Elevated Caste, a secret organization dedicated to discovering and researching ancient knowledge. The base is abandoned and in ruins, with all its personnel either dead or transformed into "the Infected", fast, zombie-like creatures that attack Phillip on sight.

Phillip discovers that he has also been infected; however, his reaction to the virus is extremely abnormal; instead of joining the infected hive-mind, he develops a sarcastic, malevolent split-personality that calls itself Clarence who constantly taunts Phillip throughout the course of the game.

Via the base's computer network, Phillip is contacted by Amabel Swanson, an Archaic research scientist who has managed to survive the outbreak by locking herself in her lab. Swanson promises to help cure Philip's infection, if he will make his way to her section of the facility and rescue her.

Through dialogue with Swanson, and various scattered documents found throughout the base, Phillip learns that the Archaic came to Greenland to look for the "Tuurngait," an ancient entity described in native Inuit mythology as primordial spirits native to the area. Penetrating deep underground, the Archaic found and released the Tuurngait, which manifested as a sentient virus that infected the base's personnel. Phillip discovers his father Howard managed to communicate with the Tuurngait, but what he learned drove him to commit suicide after sending Phillip a letter ordering him to destroy his research documents.

Phillip eventually manages to make his way to Amabel's lab, but Clarence causes him to hallucinate and murder Amabel. Using Amabel's lab notes, Phillip manages to rid himself of Clarence by extracting him using a lab machine. However, the machine transfers Clarence into a nearby corpse, which he reanimates and uses to attack Phillip.

Phillip is saved by the Tuurngait itself, as several Infected arrive to destroy Clarence, for Clarence now possesses an individual body and mind rather than part of "the many" in Tuurngait. The Tuurngait communicates directly with Phillip, sending him into his own mind and putting him through a series of spiritual tests designed to test his ability to cooperate, show mercy, and demonstrate self-sacrifice.

Once Philip passes the tests, the Tuurngait reveals all; it is an ancient entity that came to Earth millions of years ago; it once co-existed peacefully alongside the native Inuit, using "Infected" host bodies to pass its ancient knowledge to mankind. However, in time mankind began to grow and expand, and the Tuurngait burrowed underground to separate itself from the human world. When the Archaic came, they disturbed the Tuurngait's ancient slumber and attempted to exploit it, and it fought back against them in self-defense.

The Tuurngait explains that mankind is intelligent and compassionate as individuals, but selfish, petty, and destructive as a whole. However, it believes that Philip is different from most of mankind. The Tuurngait puts itself at Philip's mercy, putting him through mental tests and asking him to send a message to someone above ground, for them to destroy all information regarding the Archaic's research facility so that the Tuurngait may rest in peace. This is the same request the Tuurngait made of Philip's father Howard, however Philip thwarted it by coming to investigate instead of following his father's instructions.

Philip seemingly agrees to the Tuurngait's request, and sends an email to a friend on the surface describing his adventure. However, at the last moment, Philip reveals his desire to exercise his free will, instead of blindly obeying a higher power. Stating that he has more in common with Clarence than with the Tuurngait, Philip gives his friend the coordinates of the mine and tells him to come and destroy the Tuurngait. His last words are: "Kill them. Kill them all."

Like the previous episode, Penumbra: Overture, Black Plague is an exploration-based adventure game that takes place from a fully 3-dimensional, first-person perspective. Although the game is presented as a first-person adventure game, it also contains elements of first-person shooter and survival horror gameplay.

Gameplay features a mixture of exploration and solving physical puzzles (the Newton Physics engine allows for many physics puzzles). In comparison to the previous episode, combat has been heavily de-emphasized. Players will no longer be able to acquire mêlée weapons or create makeshift traps to fight enemies with. Instead, the emphasis is on the use of stealth and fleeing to avoid attacks by enemy creatures.

Retrieved from "https://penumbra.fandom.com/wiki/Penumbra:_Black_Plague?oldid=6541"
Community content is available under CC-BY-SA unless otherwise noted.